Cinders in the Sky

The Legacy of the Tulsa Race Massacre 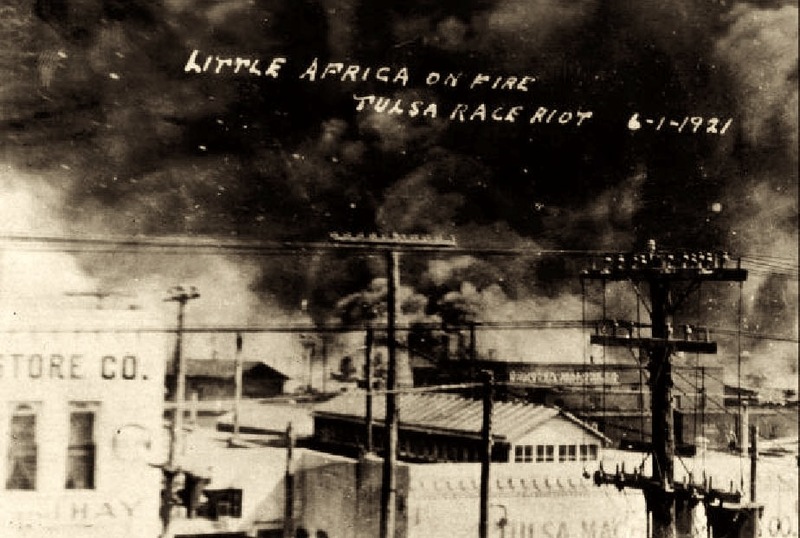 Fires burning along Archer and Greenwood during the massacre

It was supposed to be a regular Wednesday morning: the sun would rise, the men would go to work, and the children to school. It was the first day of June and the Oklahoma summer heat was preparing to settle in, the cool breeze of spring banished to the past. With it being the middle of the work week, many families were already asleep, peacefully resting for another day of walking across the Frisco tracks to go work on the white side of Tulsa.  It would have been a normal Wednesday in the Greenwood District of Tulsa, Oklahoma, too, if not for the angry white mob that descended upon the affluent Black neighborhood, otherwise known as Black Wall Street.

On May 31, Dick Rowland, a Black shoe shiner, was arrested and detained on the top floor of the Tulsa County Court House for allegedly assaulting a woman, Sarah Page, on an elevator the day before. Because of the Tulsa Tribune’s sensationalist headlines, which exaggerated the circumstances of the event, white Tulsans congregated outside the building and pressured the sheriff to turn Rowland over to them—once the fabricated rumors had circulated around town, the white mob was eager to mete out their own version of justice: lynching. In Greenwood, when the Black community learned about what was happening outside the courthouse, some of the men marched over the railroad tracks with guns and ammunition to protect Rowland from the enraged horde desperate to find him. Soon enough, a standoff occurred in Tulsa between the Black community and the white community. But when an unclaimed shot rang out on the square, the anxious silence was shattered.

Throughout the night and into the early hours of the morning, skirmishes between armed Black and white men took place on the borders of Greenwood before the white mob surged into the district and wreaked havoc on one of the only wealthy Black neighborhoods that ever existed in the United States. Fearful of a ‘Negro uprising’, an idea rooted in white supremacist ideology, the mob was soon aided by law enforcement officials and began setting Greenwood on fire. Planes circled over buildings and dropped burning turpentine balls on them. When the residents of Greenwood tried to flee their homes, some were shot down by gunfire from white men on board those planes. It was complete and total demolition: great plumes of black smoke choked the skies, parlors and restaurants were razed to the ground, Black citizens were captured and carted off to detention centers. The Tulsa Race Massacre of 1921 is categorized as one of the worst race massacres the country has ever seen, but has been majorly and purposely erased from the racial history of the United States. With the official death toll undetermined and the two hundred million dollars in economic damages still not repaired, the Greenwood District of Tulsa has never recovered from this attack.

As we come upon the hundredth anniversary of this event, this exhibit is designed with an aim to explore and ruminate on the legacy of Greenwood before and after this crisis. What follows is an examination of what the district looked like before it was destroyed with reflections from those who lived through the massacre. We've also included a discussion on the language of how to frame this event, and resources for you to follow to help Greenwood. As you delve into this collection, we ask you to consider the history of Tulsa that is still being devastated by a government’s inadequacy to acknowledge their role in this massacre, and the racial trauma still apparent in the city today.